Zombies vs. Unicorns at the Baltimore Book Fest

The day before the National Book Festival, Aine and I headed to Baltimore's book festival to check out the epic Zombie vs. Unicorns panel and to hear author/illustrator Ted Naifeh speak.

The two festivals couldn't have been more different. The National Book Fest was all about the speakers and signings. You couldn't even buy books there. The Baltimore Book Festival had some fun panels, but there was also great food and shopping (I got a new journal, are you shocked? You shouldn't be). 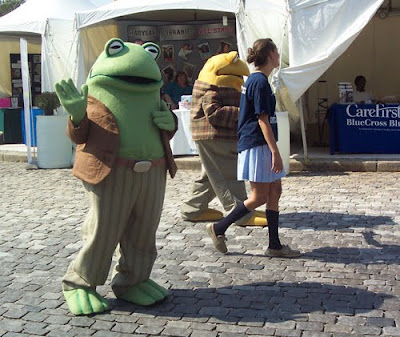 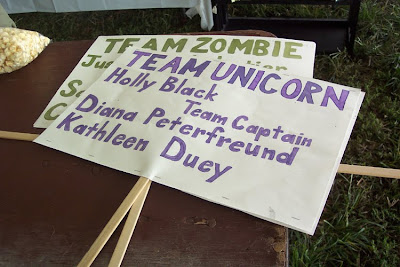 With Team Unicorn tossing packets of glitter and lollipops into the crowd, the two sides prepared to battle. Let's get it on!

Scott Westerfeld kicked it off with a comparison of zombie vs. unicorn literature. He quoted from the zombie classic, World War Z, and then noted all the other great zombie books out there. He then cited some sappy, gods awful self-published work as his example of great unicorn literature. Now I cry foul, because how can he cherry-pick such a bad example when Diana Peterfreund is sitting right across from him? Not to mention he completely ignored Peter Beagle's The Last Unicorn.

But Team Unicorn hit back with Diana noting the complete lack of zombies in classical art, while unicorns have been appearing in art for centuries. She cited a work of Raphael's (the artist, not the Ninja turtle), as well as countless medieval tapestries and the work of 80's artist Lisa Frank.

Team Zombie then argued that what was so great about zombies was preparing for the coming zombie apocalypse. Let's face it, they said, zombies are at the top of the food chain. While Justine Larbalestier described unicorns as "just horses with deformities on their foreheads," and horses are easily frightened creatures. Team Zombie also noted that unicorns are sexist, since they're usually depicted as hanging out with female virgins.

But Team Unicorn turned their argument around. What's the end game of a zombie apocalypse? Total annihilation of the human race, and that's not good. People run from zombies, but people would run up to unicorns to pet them.

Someone, I think an audience member, then pointed out that zombies could be used as slave labor. The two teams got into a discussion of the ethics of using zombies as slaves, with the suggestion that perhaps zombies could be unionized. What about unicorns, then? Should they be unionized too? Holly Black responded that unicorns didn't have a union, but they did have a business, called 'Unicorp.'

There was then a discussion of what a unicorn apocalypse would look like, and how much cooler it would be than a zombie apocalypse. Unicorns would descend from the sky, charging towards you, with rainbows and glitter everywhere. People would run up to pet the unicorns, only to be speared by their pointy horns. It'd be terrifying, yet very confusing at the same time.

Justine Larbalestier pointed out that a unicorn apocalypse wouldn't be very fun though, because anyone can kill a slow-moving zombie, that's part of the appeal of a zombie apocalypse, while only virgins and SWAT team members would be safe from fast-moving, clever unicorns. And do we really want to live in a world filled with just virgins and SWAT team members? Plus, a unicorn apocalypse would suck because after you killed a unicorn you'd feel bad.

Holly Black then opened the floor to the audience, so that they could make their case for Team Zombie or Team Unicorn:

* For Team Zombie: There were zombies in Thriller, and Thriller is awesome

* A librarian made an interesting point for Team Zombie: If your parents find a unicorn book in your room, they won't be bothered by it. But if they find a zombie book, they'll get worried. So read about zombies, because they'll freak your parents out.

* Ted Naifeh also joined in to make, not so much an argument, but a good point about unicorns. That in terms of girls' interests, that they're part of a continuum that starts with bunnies, moves to unicorns, then goes to sparkly vampires, and finally ends up with real, actual boys.

Ted also made one of the best arguments for Team Unicorn, which is, if you're a zombie, you've already lost. You're dead, so even if you wipe out the whole human race, you can never really 'win.' It's a lose-lose situation.

I think Holly Black's closing statement in favor of unicorns was the best though, and was so convincing that I went from being a fence-sitter to being firmly and proudly on Team Unicorn. According to Holly, if you look in a mirror and see a zombie looking back at you, then that sucks, because you're dead, you've either killed your family or are going to try to eat them, and you're decomposing and gross. But if you look in the mirror and see a unicorn looking back at you, then you're happy, because that unicorn will probably pull you through that mirror and take you to a magical world. A magical world where you're the lost member of a royal family and can understand small woodland creatures. You probably also have a special power that no one else has.

In other words, unicorns are symbols of happiness and hope, and in this world, we definitely need more of that. Team Unicorn for the win! 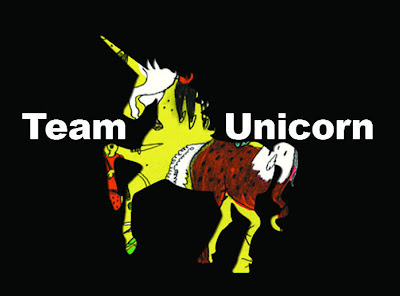