I'm not particularly thrilled with the name, but my blog is called 'Surviving Writing a Book' for a reason. There are days, many days, when I feel I haven't so much embarked on a quest to get published as I've embarked on a slow descent into madness.
Just so you know where I stand with things: I have a YA Urban Fantasy called Knights of Avalon, about the Knights of the Round Table being reincarnated as New Jersey teens. I love my story. Yeah, yeah, I know all writers love their stories, but I fully, 100%, believe in this story, in a way that I didn't know was possible until I wrote it.
Problem is, I've been querying for over a year now and have piled up enough rejections to create a very pleasant bonfire with which to roast marshmallows over. I know my query isn't the problem. I've gotten too many partial and full requests for that to be the issue. No, it's something with the manuscript itself.

Some of the agents who have rejected me, very kind and awesome agents, have told me that they just didn't fall in love with the manuscript. I get that a lot and really, that's not a bad response to get, but at some point, when you hear that over and over, you wish there was a more fixable problem. Something like, "There's a giant plot hole...right over there." Yeah, I could fix that. But how do I make someone love something? Maybe have an agent read the manuscript over a candlelight dinner? With a violin concerto softly playing in the background? 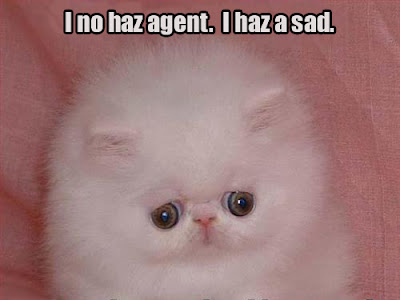 I have my suspicions...maybe my main character is too unsympathetic, maybe my words somehow lack emotional impact, maybe I just don't write well enough... but I'll keep working at it, always trying to make my story better, because while I believe 100% in Knights of Avalon, I also believe 100% that there's still room for improvement.

I'm kind of running out of agents to pester though, and at this point, I have the feeling I'm not going to find one. Not right now, at least. It's frustrating, and I would prefer to have one, because my beagle can negotiate a contract better than I can. But I'll go it alone if I have to, and I think I'm going to start querying publishers (reputable ones) who accept unagented submissions. And you better believe I saw Sourcebooks' call for YA manuscripts and sent mine in weeks ago. Wish me luck, because so far my luck's been pretty lousy, and I'll let you all know how it goes!
Posted by Melissa at 11:24 AM