Update: And the winner is...Seleste deLaney! Congratulations! I'll be in touch via e-mail.

Thanks again to everyone who entered. Stay tuned, in the next couple of days I'll be giving away a signed copy of Leah Clifford's A Touch Mortal.

--
I was in the car this morning when the Bananarama song Venus came on. You know, that song from the 80's:

She's got it
Yeah, baby, she's got it
I'm your Venus, I'm your fire
At your desire

The song, besides being a catchy '80s tune, got me thinking about Sirenz, my next PAYA giveaway. And not only do you get a signed copy of this tasteful tiffany blue-hued work of fiction, but there will be swag, oh yes, for authors Charlotte Bennardo and Natalie Zaman have some of the best swag around.

Bickering frenemies Meg and Shar are doing some serious damage at a midnight sample sale when the fashionistas find themselves arguing over a pair of shoes-with fatal consequences. One innocent bystander later, the girls are suddenly at the mercy of Hades, Lord of the Underworld himself. To make them atone for what they've done, Hades forces the teens to become special-assignment Sirens, luring to the Underworld an individual whose unholy contract is up.

Finding that delicate balance between their fashion addiction and their new part-time job in the eternal hellfire biz turns out to be harder than Meg and Shar expected, especially when an entire pantheon of Greek deities decides to get involved. Then there's the matter of the fine print in their own contracts... 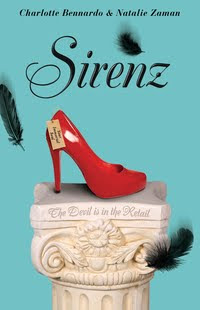 1. Respond to this post and you'll automatically be entered into the contest. The winner will be chosen at random.

2. For extra credit (and one extra contest entry), please answer the following question: Who's your favorite Greek God or Goddess?

3. If you're my little brother, you can't enter.

4. You must follow my blog. You're also more than welcome to follow me on Twitter (@LiteraryMouse), but you're not required to. But it would make me happy.

6. The contest is open to everybody, US and International.

If you have any questions about contest rules, please leave them in the comments!

Posted by Melissa at 9:35 AM 6 comments: Links to this post

Update: And the winner, as selected by my dog Hope, is...Erinberry! Congratulations! I'll be in touch via e-mail.

Thanks to everyone who entered. Stay tuned, because tomorrow I'll be posting another PAYA-related giveaway.

And as for what I'd name my not-at-all-haunted, I-swear-there's-nothing-strange town, here are some of my ideas:

I'd suggest Silent Hill but that was already taken.

I've been waiting for Scott Tracey's Witch Eyes to come out for a long time. How long? I first heard about the book ten months ago. I went to Good Reads, saw lots of great reviews, and knew I had to run out to the store to get it. Except no one had ever heard of Witch Eyes. People looked at me like I was crazy. I was all, "No, I saw reviews for it, it must be out." Lesson learned. Just because a book has reviews on Good Reads doesn't mean it's out.
But now you get a chance to win a signed copy. Besides being a fun read, Witch Eyes is a natural hellhound repellant and an excellent source of Vitamin C. In addition, did you know that Scott Tracey's tweets are insured for $10,000 and that he does car commercials in Japan while speaking Norwegian? Bet you didn't.

Book Summary:
Braden’s witch eyes give him an enormous power. A mere look causes a kaleidoscopic explosion of emotions, memories, darkness, and magic. But this rare gift is also his biggest curse.
Compelled to learn about his shadowed past and the family he never knew, Braden is drawn to the city of Belle Dam, where he is soon caught between two feuding witch dynasties. Sworn rivals Catherine Lansing and Jason Thorpe will use anything—lies, manipulation, illusion, and even murder—to seize control of Braden’s powers. To stop an ancient evil from destroying the town, Braden must master his gift. 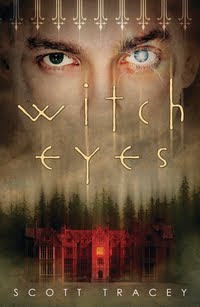 How to Enter:
1. Respond to this post and you'll automatically be entered into the contest. The winner will be chosen at random.
2. For extra credit (and one extra contest entry), please answer the following question: Witch Eyes takes place in the ominously-named town of Belle Dam. If you were writing a novel, what ominous name would you pick for your town? If you need any help, here's a helpful post Scott wrote on naming your fake town.
3. If you're my little brother, you can't enter.
4. You must follow my blog. You're also more than welcome to follow me on Twitter (@LiteraryMouse), but you're not required to. But it would make me happy.
5. Deadline to enter is Tuesday, September 27, at 9pm EST.
6. The contest is open to everybody, US and International.

If you have any questions about contest rules, please leave them in the comments!
Posted by Melissa at 9:09 AM 8 comments: Links to this post

Alternative Titles for this Post: "Red Shoe...Nom Nom Nom" and "Just Say No to Delaware."

To recap: PAYA scheduled for August 27. Historic hurricane, being a big fan of YA and really wanting a signed copy of Sirenz, schedules itself to hit the same day. As a result, PAYA was moved up an hour so we could all skedaddle early and the Writing Workshop was cancelled.

I was sad about the workshop being cancelled. 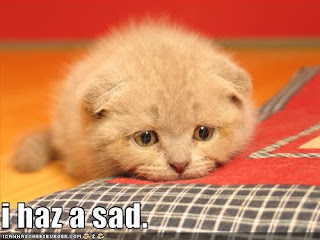 Then again, any need to have my first pages critiqued was far outweighed by my desire not to get clobbered by a giant storm.

Once at PAYA, Aine and I descended upon the table where books were being sold, having been warned that supplies were already running low. Aine got the last two copies of Scott Tracey's Witch Eyes and gave one to me, because she's awesome.

First I was thrilled, then I felt guilty, because I'll be giving it away in a contest.

But I hope you all will be happy, because I'll be giving it away in a contest.

For myself, I got Dianne Salerni's We Hear the Dead and Ellen Jensen Abbott's Watersmeet. And check out how Ellen signed my book: 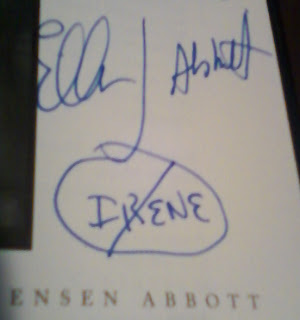 While Ellen signed, I chatted with her and the lovely Alissa Grosso, author of the YA Contemporary Popular. Ever since I read the plot summary, I haven't been able to get Popular out of my head, so you might want to check it out.

For my PAYA giveaway, I got the aforementioned Witch Eyes, Sirenz by dynamic duo Charlotte Bennardo and Natalie Zaman, The Dark Days of Hamburger Halpin by Josh Berk, and Leah Clifford's A Touch Mortal.

I spent a lot of time at Charlotte and Natalie's table, stealing their swag. They had some interesting things like a calling card from Hades and these cute Nekocat charms. What kept me coming back though were the little red shoes made out of chocolate. Mmmmm, swag.

Charlotte was also kind enough to speak to me about how Sirenz got published. Instead of querying agents first, Charlotte and Natalie went directly to the publishers. And though their publisher plucked them out of the slush pile, she highly recommended attending SCBWI's conferences to network with editors, pitch, and learn more about the craft. It should also be noted that they got rejected, a lot, before finally being picked up, so perserverance is key.

After the book signings, there was the raffle. I love raffles, and I'm really lucky, so I've won quite a few in the past. Mostly by buying mass quantities of raffle tickets. I generally find that if there are 100 raffle tickets stuffed in a box, and 99 of them belong to me, that I win. See, me=lucky. I approach publishing the same way, I make my own luck.

So there amidst all the wonderful books being raffled were two turtle necklaces. One had a silver turtle charm and a vivid blue metal chain. The other had a black chain and a pendant that contained a drawing of two turtles. They were somehow related to a book...but I don't remember which book because I was too busy figuring out how many raffle tickets I needed to buy.

With signed books, and turtles, in tow, it was time to head home. Our usual route would take us through the fine state of Delaware. Delaware, which is kind of close to the ocean, and which was currently getting pounded by a hurricane. We didn't want to go to Delaware that day. After checking the weather reports and Doppler radar, we told the GPS to take us another route, away from Delaware and further inland. The *$@%#$ GPS, apparently in collusion with the hurricane, kept trying to take us to Delaware anyways and actually managed to lure us to the state for about two minutes before we turned around. Luckily, Aine has a great sense of direction and figured out the GPS' sneaky, hurricane-lovin' ways.

After beating the GPS into submission, we got home without incident. It was rainy, sometimes very rainy, but there was hardly any wind. If we had been living under a rock, not paying attention to the news, we'd have thought it was just a regular rainy day.

Next Up: My Crazy-Girl-Braved-a-Hurricane-for-Books Contest begins with a giveaway of Witch Eyes.
Posted by Melissa at 9:29 AM No comments: Links to this post

Yeah, I went there, what ya gonna do about it?
When PAYA's organizer, Skyanne, first asked me if I was coming to this year's festival, I think I told her, "I'll be there, barring a natural disaster." You know, natural disasters, like earthquakes and hurricanes. That happen in places like California and Florida. Not Pennsylvania. Because when was the last time you heard the word "natural disaster" and "Pennsylvania" together in a sentence? In PA, a natural disaster is a herd of deer eating your prized petunias.
So, there was this: 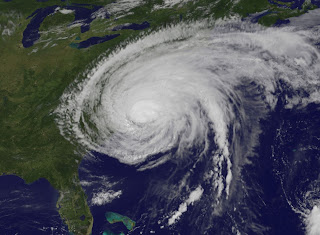 I do not remember Skyanne inviting some chick named Irene to PAYA, but there she was, in all her soggy, stormy glory, wanting a copy of Witch Eyes before it was out in stores.
So my best bud Aine and I were like this: 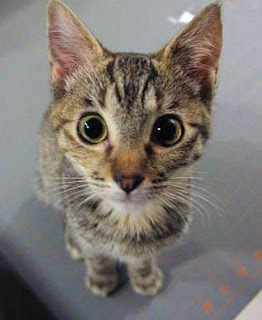 To go or not to go? Stay at home or risk a hurricane? Heck yeah, we braved the wrath of Mother Nature for books. Is your signing in the crater of an active volcano? In the middle of a blizzard on K2? We're there.

False bravado aside, I don't mess with storms. I've been through 4-5 hurricanes in my life (all Category 2 or less) and I know how dangerous they can be. Aine and I didn't make a final decision on whether or not to go until the morning of the festival. We checked the weather forecasts, carefully reviewed our travel routes, and came up with a couple of back-up plans in case the storm picked up strength faster than predicted. Thanks to Aine's iPad, we were able to transform her car into a mobile weather center. While she drove, I followed the track of the hurricane on the Doppler radar and via a variety of weather sites. We always had a good sense of where the storm was and what it was up to.

It's about a 3-hour trip to West Chester, PA, where PAYA was being held. With many thanks to the Weather Gods, we got there pretty much on time, and with hardly a single drop of rain. Of course we knew the trip back would be the tough part.

PS-I'd like to note that this year, I woke up before Aine. Woohoo! Carlton dance!

Next: The PAYA Saga continues with Part 2: The Turtle Is Mine.
Posted by Melissa at 12:59 PM No comments: Links to this post