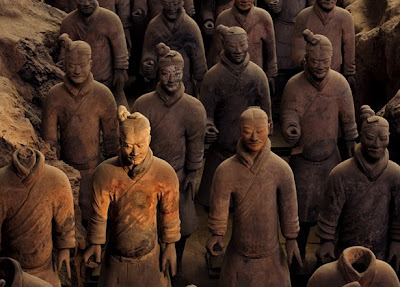 I can't stress this enough to writers: I know you're told to read widely, to know the books in your genre, but there's a whole marvelous world out there that you should be exploring too. Visit a museum, tour some old ruins, read up on the French Revolution. Maybe you'll get an idea for your next book. If nothing else, you'll have expanded your understanding and broadened your mind, because ultimately, history is about people and how they react in certain circumstances, art is about human emotion given form. Gain a better understanding of both and you'll become a better writer.

I recently visited the Terra Cotta Warrior Exhibit at the National Geographic Museum in DC (all sold out, I'm afraid). Not only was it an amazing experience, getting to see statues detailed down to the soles of their shoes, with unique faces and hair-dos, but I got inspiration for a story I've been struggling with for over a year. The tentative title of the book is the Walls of Shangri-La, about a boy who lives in a walled paradise that no one has left for a thousand years. When one day a girl in a hot air balloon flies over the city, the boy becomes determined to find out what's outside the walls, even if it means imprisonment and the destruction of his family.

I already have one villain for the story, but with the way I have things planned out, I needed a second villain, bigger and badder than the first and I had no idea what to do. I was stuck, until I went to this exhibit. Now I think I'm going to base the villain on the First Emperor of China. Here are some things I learned at the show that I'm probably going to incorporate into the character and the book:


There are plenty of more details that I want to put into the book, like the decorated tiles I saw and Chinese symbology. As creative as I might be, everytime I learn about the past, I find something amazing that I could have never dreamed up on my own.
Posted by Melissa at 7:35 PM