VA Book Part 3: The YA Panels, and the Agent I Did Not Stalk

Fun Fact: Until the Virginia Festival of the Book, I had never met an agent. And by 'meet an agent' I mean, never been in the same room as one. I suppose I could've been in the Greenie aisle of the local PetSmart with Colleen Lindsay or at the Baltimore Aquarium's shark tank with Janet Reid and not known it, but this was my first, genuine sighting of a literary agent in the wild.

I walked into the room for the 12pm "Getting Published - Picture Books to Young Adult" panel and spotted Andrea Brown supa-agent Laura Rennert kindly explaining to someone how they could query her via e-mail: Be sure to put 'query' in the subject header and include the first ten pages of the manuscript in the body of the e-mail. In other words, exactly what the web site tells writers to do. She was very patient and I watched a couple of other people approach her as she made her way to the front of the room.

Though I didn't talk to her, because let's face it, she was being bugged enough as it was, I could tell that she was smart, scary smart. If contract negotiation was a martial art, she'd be a ninja master. Whenever the panel touched upon the issue of agenting or deal-making, she'd get this gleam in her eye and you could tell she was in the zone. She probably doesn't walk out of editor meetings so much as vanish in a veil of smoke.

I know there wasn't much to my agent sighting, but yes, it totally made my day in a, "Oh my gods, agents DO exist! They're not just figments of my imagination" sort of way. Besides Laura, who was there to talk about her new picturebook Buying, Training, and Caring for Your Dinosaur, authors Deborah Heiligman, Bonnie Doerr, Emily Ecton, and Ruth Spiro were also on the panel.

Though the panel was supposed to cover everything up to YA, a good deal of the discussion focused on picturebooks and just how different they were from other types of juvenile fiction. Because there's a visual component to the book, you really don't need descriptive words, yet every word you do use should set a mood and tone.

I also knew that picturebook authors didn't get to choose their artists, but I didn't know that they oftentimes don't even see the final product until their book is about to hit the shelves. That was quite the shock!

Besides the subject of picturebooks, there was an interesting discussion on the role of literary agents and whether or not you needed one. I think two of the authors on the panel were unagented, but everyone pretty much agreed that you should get one if you can, but make sure that the agent is reputable and a good fit. In particular, Deborah Heiligman mentioned that her award-winning non-fiction YA on the marriage of Charles Darwin, Charles and Emma: The Darwins' Leap of Faith, would never have happened without her agent's support. Not only can agents negotiate better deals, but they can offer long-term career guidance and act as a sounding board, letting you know when to push ahead with a project and when a project needs more work. 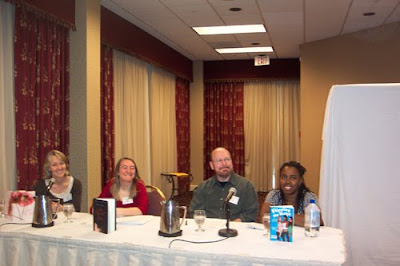 My second YA panel of the day was "Hot Young Adult and Teen Fiction" with David Macinnis Gill (Soul Enchilada), Jennifer Hubbard (The Secret Year), Paula Chase Hyman (Flipping the Script), and the wonderful Amy Brecount White (Forget-Her-Nots). See the picture above! Each author read an excerpt from their books and though contemporary YA isn't my thing, I was surprised by how much I liked the work of the two contemporary writers on the panel, Jennifer Hubbard and Paula Chase Hyman. Of course, Amy Brecount White and David Macinnis Gill were amazing too. Amy's excerpt from Forget-Her-Nots had me on the verge of sniffling and crying, which is a little bit embarrassing, and David's sneak peek of his upcoming sci-fi YA set on Mars had me laughing out loud (it's not a comedy by any stretch, but the scene involved the main character high up on a platform, miles above the Martian landscape, fighting with an artificial intelligence that was calling him chicken for being scared of heights).

What followed next was a really good discussion of inspiration, 'edginess' in YA, future YA classics, and what responsibility do YA authors in particular have to their underaged readers.

Up Next: My interview with the author of Forget-Her-Nots, Amy Brecount White!
Posted by Melissa at 6:35 PM