If I Had a Pen Name

Hanging out with my Dad a couple of weeks ago, he asked me out of the blue what my pen name was going to be. The conversation went something like this:

Me: Um, pen name? I was thinking of using, you know, my actual name.

Dad: But you could have a pen name. Don't you want a pen name?

Me: Nah, I think I'm good. I know my name's not the most exciting or catchy, but it works for me. 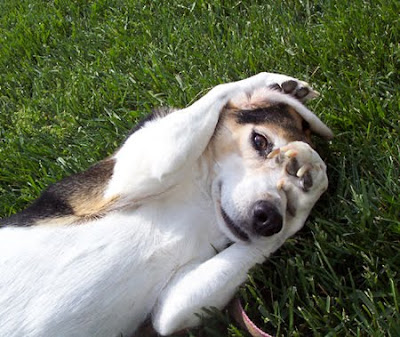 Me: So my pen name could be Lucy T. Beagle then? There is a famous author called Peter Beagle, I guess it could work.

Me: The, as in Lucy The Beagle.

While I do want to use my real name, I admit I've been toying with the idea a little, and I think I'd like to add a middle name at some point. You see, I don't have a middle name in real life, so part of the fun would be in choosing one. I have a couple of ideas, but all I know is that it has to start with the letter 'A'.

Why that letter? Because at my work, everyone is required to have a middle initial, it's just how the computer system works, and by committee, it was pretty much decided that my middle initial would be 'A', because that'd be cool. No really, the CFO declared that having my initials be 'MAB' would be 'cool'. It was either that or 'MOB', but he said he didn't want to be mean.

Shortly afterwards, on some paperwork completely unrelated to my job, I saw that my middle initial was listed as 'A'. I figure it's a sign from the universe, so I'll go with it.
Posted by Melissa at 6:34 PM