On a whim, I've decided to participate in PonyFest '13. It's a contest where you create a My Little Pony inspired by your book. How cool is that? I'm not the least bit artistic, but thanks to the magic of the Pony Creator, I can whip up a pretty mean pony despite my complete inability to draw anything but stick figures. My latest manuscript is Beautiful Medusa, a YA fantasy with Medusa as the hero and a bunch of well-known Greek monsters, so I had plenty of great characters to choose from.

The first one I did was, naturally, the Pegasus.  Ah yes, the snow white Pegasus, soaring majestically with Perseus on his back...  Except my Pegasus is kind of a jerk.  When I was jotting down notes on him, I called him a "flying kelpie war horse."

Soaring on powerful wings, the Pegasus spiraled downwards, landing with an elegance that belied its massive body.  I forgot myself, gaping at the creature as it shook its wild mane, the sun gleaming off a coat so dark gray as to be almost black, a storm cloud given form.  The Pegasus returned my stare, my gaze having no effect, its eyes crackling with intelligence, rows of sharp teeth lining its mouth.

And here's the Pegasus in My Little Pony form: 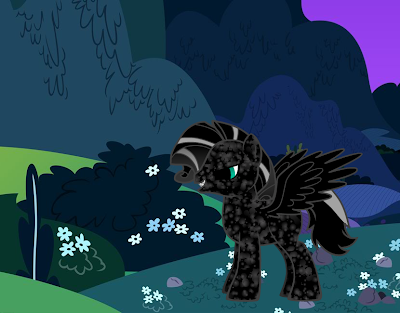 The next one I did was Medusa.  I'm not sure why her background didn't show up, but here she is: 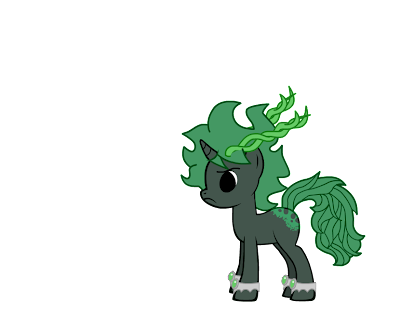 I couldn't do snakes, so I did my best to give her pony incarnation something that looked snake-like.  Then I added the frown because, well, she's Medusa and she's not really happy about it.  She has bracelets because despite being a monster, she still likes to wear nice clothes and jewelry.

I hope you enjoy!  Maybe I'll do Prometheus, Athena, or the Sphinx sometime.
Posted by Melissa at 7:27 PM