And Now for a Confession

People of the Internets, I have a confession to make.

First off, that swarm of bees in New York City? 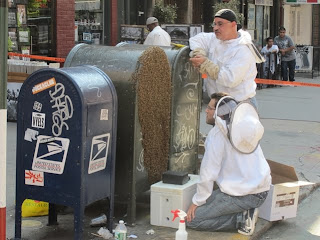 My bad. A word of advice to anyone trying to genetically engineer a swarm of super-intelligent attack bees to take over the world: CLOSE THE DOOR BEHIND YOU. When I walked into my underground lair the next day, all I was left with was a note, in teeny tiny print, telling me the hive had decided to check out a show on Broadway and then hit the Magnolia Bakery afterward for some Red Velvet cupcakes. So now I have to start from scratch and get another grant from DARPA.

Second, as you most likely are aware, there have been several articles of late criticizing YA for being too dark, or not serious enough, or for having cooties. Articles like this, and this. Here's my confession, and it's a big one...These articles were written by me. Yes, I freely admit it! I even went so far as to hire several extras from Glee to go out into public and claim they wrote the pieces to throw people off the trail.

Just like the great Coosawhatchie hoax of May '11*, I never thought the deception would go so far, and I'm deeply sorry for upsetting Twitter. I thought it was obvious that these articles were nothing but a scam. I mean, you all should've known something was up when I said I walked into a bookstore and couldn't find any lighthearted YA! And I can't believe that whole thing about only needing to write 2-3 drafts for a YA book didn't tip somebody off. Finally, the aliases I chose to write under were a clever anagram. If you take each of the authors' names and rearrange the letters, you get, "Sparkle Vampires Rulz, Slutty Werewolves Drulz. Edward xoxo." I really hope someone caught that. I thought that was especially clever of me. 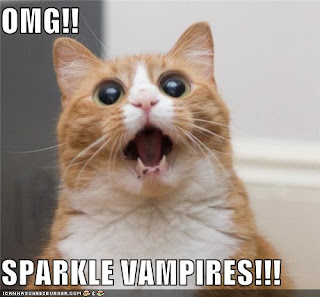 You may be asking yourself, Coosawhaaaa? You may also be asking yourself, why would I perpetrate such a hoax? And here, my dear readers, I must admit to being wholly selfish, for I wanted to keep the awesome to myself. You heard me! YA may be awesome, but it's also a limited resource, and just like Strawberry Pocky and bubble wrap, there's only so much of it to go around. Imagine a world (it'd be a dystopian world) where you walk into a bookstore, and they're all out of Maggie Stiefvater's Forever. Or you try to download Veronica Roth's Divergent onto your Kindle and the...um..Internet tubes are all clogged because... er, everybody wanted to download it... at once. Anyways, like Gandalf before the Balrog, I was determined not to let this pass! So I tried to scare people away from YA. Hey, it worked on Scooby Doo.

To sum up, I'm really, really sorry. On a scale from 1-10, with 1 being 'Oops, I'm sorry I accidentally stole your Belgian chocolate' and 10 being, 'I'm so sorry I took you to the re-make of The Wicker Man,' I'd be a 12. In the future, I promise to limit my hoaxes to South Carolina Sasquatch and urban legends involving the Washington DC Metro.

*Because it can't be said enough: To my knowledge, there are no Bigfoots in South Carolina and if there are, the locals do not call them 'Coosawhatchie.'
Posted by Melissa at 6:32 PM