Since my best friend Aine already did a great job covering our trip down to Raleigh for the Breathless Reads book signing, I thought I'd do something a little different and try a top ten list.

We came, we got books signed, we had fun, and here's ten things I learned along the way:

1. You can never find a Cracker Barrel when you need one.

On the way down to Raleigh, we decided to stop at a Cracker Barrel to eat. The sign said there was one up ahead, it promised us a Cracker Barrel. I'm quite sure we didn't imagine it. It took us significantly longer to drive down (7 hrs) than to drive back up (4.5 hrs). You know why? Because we were looking for that frakkin' Cracker Barrel.

It's like they have cloaking devices. Maybe only certain mortals have the ability to see them. A blessing to some, a curse to others, only a chosen few possess the Seventh Sense, otherwise known as the Cracker Barrel Sight.

On the way down, Aine kindly let me play with her iPad. There were two problems with the iPad: I couldn't type fast on it, so I don't think it'd work for writing, and it was addictive as hell. A potentially dangerous combination. As for my camera, I don't really have one right now, so I've been using my cell phone, with mixed results... 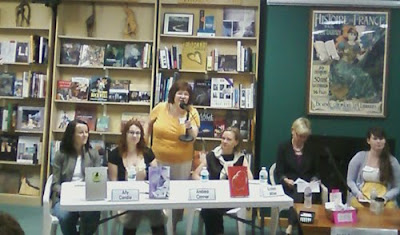 I swear, these authors are much less blurry in person. 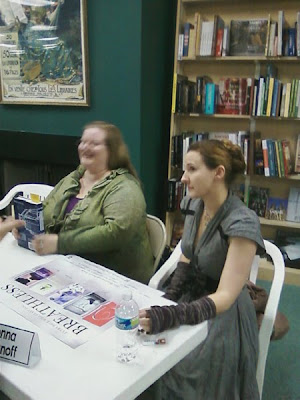 3. Beth Revis is all about the explosions.

Looking over my notes, I can't tell you how many times the words 'Beth Revis' and 'blow stuff up' appear in close proximity. Also, Beth, who was a school teacher, killed off a bunch of former students in her book. So don't mess with her!

4. Kirsten Miller has the best how-I-got-published story I think I've ever heard.

It goes like this: Kirsten was living in Manhattan at the time. While on her lunch break at work, waiting in line in the cafeteria, a co-worker asked her what her plans were for the weekend. A little embarrassed, she mentioned that she was writing a book. The co-worker said he "knew someone in publishing" and asked to take a look. So she gave him the manuscript, expecting that he'd put it away and never give it a second glance. Except the next day, he got slammed with a terrible case of the flu, so bad that he couldn't get out of bed, and the only reading material within reach was Kirsten's manuscript. Stuck in bed, he read it and liked it enough to pass it on to his friend, who helped Kirsten get published.

The moral of the story: If you're having trouble getting published, maybe you should move to New York City and hang out in random cafeterias.

5. Ally Condie is working on a book for her son's birthday.

According to her young son's very exacting specifications, it has to have animals, but no cats. Cats are forbidden.

6. There were a whole lot of 'jigsaw' writers on the panel.

When I say 'jigsaw', I mean writers who write out of order and piece the scenes together. I think Beth Revis was the only writer who didn't do that. Her style was more linear, one sentence after another, with little to no idea what would come next. I totally understand that, because I've tried the jigsaw method before and it did not work for me.

Brenna Yovanoff, on the other hand, doesn't just write out of order, even her sentences aren't fully formed at first. It's only later that everything is smoothed out and made cohesive. I also thought Brenna had a good piece of advice, in that she talked about the importance of actually finishing stuff. She said that she'd written many fragments of books, but actually finishing one was an entirely different experience.

7. Everybody on the panel has some exciting projects they're working on.

Beth Revis is writing A Million Suns, the sequel to Across the Universe.

Brenna Yovanoff's next book will be called The Space Between.

Kirsten Miller is working on All You Desire, a sequel to The Eternal Ones.

Ally Condie has Crossed, the follow-up to Matched, coming out later this year.

And Andrea Cremer, who has the impressive ability to juggle multiple projects at once, is working on a Steampunk series, a prequel to Nightshade set in the highlands of Scotland in the 1400s, and probably a project or two that I wasn't able to write down. Because that girl's prolific, that she is.

8. The spaceship in Across the Universe is inspired by the Planet Express ship in Futurama.

Also, Beth Revis is a browncoat. I hereby award her 10,000 extra awesome points just for that.

9. Andrea Cremer was obsessed with the name Majesta when she was ten years old.

Andrea says she can't write until the name is right (I'm like that!). While Beth Revis just picks names that she likes. Brenna Yovanoff is a spontaneous namer too.

10. On the subject of names, Kirsten Miller once met a taxi driver named Bedelletrix.

Kirsten immediately decided that she would have a character with that name in one of her books, and that Bedelletrix would be a) a villain b) wear Lee press-on nails c) raise Chinchillas.

Quail Ridge Books, where the book signing was held and which is a surprisingly large indie bookstore in Raleigh that I'd love to visit again, has one of the best bathrooms I've ever seen. If you visit, you really must stop and see the bathroom. You must!
Posted by Melissa at 6:17 PM